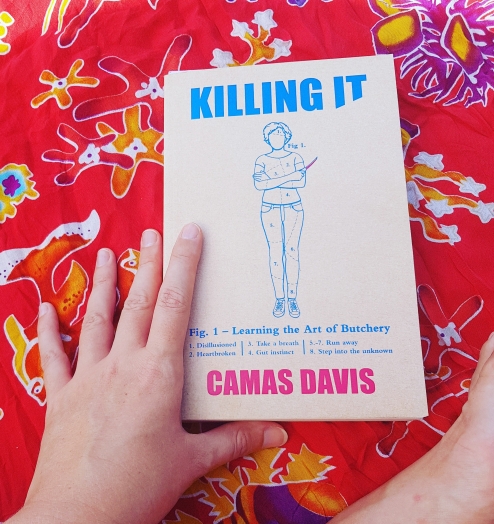 In the world of food I often feel like there is very little compromise. There is a big divide, which is social, cultural, and moral that forces people to make ultimatums between vegetarianism/veganism or an omnivorous lifestyle. People who don’t eat meat do so for many different reasons, but a lot of them do so because they are concerned about the welfare of animals. Others do it out of religious or social reasons. The question of eating meat or not is complicated though. On the one hand, many people do not know how to answer if meat eating is ethical, and on the other hand many people would argue that meat eating is in and of itself completely unethical. I am not sure that Camas Davis’ memoir Killing It: An Education can answer all the questions about eating meat, neither do I think this review of her book can do much more. What I do believe is important about eating meat is that we are asking questions, investigating how meat is farmed and made, and how we could change our meat consumption to make meat eating better for the world.

I feel like before going into this review it is important to talk about my own stance on food, eating meat, and vegetarianism/veganism. I am an omnivore and have been my whole life. I am also an omnivore with food allergies and intolerances, which makes eating a bit of a minefield sometimes. As someone with food allergies to some of the major (non-meat) plant-based protein sources, my diet is complicated. I do not believe I could be healthy and vegan. And with advice from my allergy specialists I have finally found a food formula that works for me that is an unapologetic omnivorous menu.

I have also always eaten meat. I have fished/hunted and killed animals to eat. I have helped tan the skins of animals for leather and washed out intestines to make sausages. I like to eat and use as much of the animal as possible. Much like Davis, I come from a small part of society that has been connected to the life, death, and consumption of animals. The full circle of life, if you will. Whilst Davis talks of an education on where meat comes from in her memoir, I would argue that we need a re-education and a re-learning of where meat comes from and how we should be eating it.

The meat industry is often clouded with mystery. As Davis explains, most butchers would not be able to tell you how their meat got to them. If the animals were happy, free, old, young, etc. There is a real disconnect with meat on our plates and the cows walking around outside. Most people are disgusted by raw meat or the thought of killing animals, yet still eat meat. Most people would not be able to tell you how old pigs are at slaughter. We have had the hard stuff taken away and hidden from us, and so we end up clueless about the process. This leads us to often making decisions about meat consumption based on price (cheap is best) and not based on how the animals lived or were treated before and after slaughter. Something else that Davis only briefly touches on in the memoir is also the complication of class and money. A lot of people around the world eat meat because that is what is available. It is cheap or easy and therefore uncomplicated. It is easy to talk about ethical meat consumption when you have a steady stable job with a good salary and healthcare. It is entirely another story when you add poverty, food deserts, and class structures to the mix of ethical meat consumption. Although, like Davis suggests, meat consumption doesn’t have to a ‘yes’/’no’ answer. I believe, like Davis, that there are ways to eat meat ethically, which takes into account not just the way the animal was raised, but also the environment at large. It does mean that we need to cut down on the consumption of meat, buy meat locally, and learn more about how animals are treated through the entire process. I also strongly believe in witnessing the death of animal you are going to eat at least once in your life. If you eat meat, but killing an animal makes you cringe in horror, then maybe you should think about why you eat meat at all.

Re-learning how to eat meat means that action has to come from governments and the food industry as well as from below, the people. It means asking your butchers where their meat comes from. It means maybe looking for local farmers to deal directly with rather than big supermarket chains that buy from factory farms. It means having real and honest conversations with vegetarians and vegans and maybe looking at some more vegetable-based meals than you’re used to. Contrary to popular belief, I don’t think that many vegetarians/vegans and/or animal rights activists have largely differing beliefs to the average omnivore. In fact, I think most people care about animal welfare, what happens to the environment, and trying to find ways to be healthy regardless of whether they eat meat or not. However, we have also created kilometres of no-mans-land between the two ideologies and neither side wants to come over the trenches to share a meal.

I also want to say that we cannot forget people with illnesses that directly impact how people eat. People with autoimmune diseases like allergies, Crohn’s disease, and ulcerative colitis (just to name a few) are often attacked for their food choices by vegetarians and vegans who refuse to believe that there are people who cannot be healthy just on plant-based diets. Not to mention people with anorexia, orthorexia, autism, ADD, and OCD (again, just to name a few) cannot restrict their diets because of their mental health and general well-being.

Food is always personal. It is so strongly linked to our culture, our family, our way of life, and our identity and we often forget this. I think this is partially why discussions about food can be so heated and passionate. We need to have more conversations about the way we consume meat that includes discussions about poverty, illness, availability, health, and social inclusion. We need to re-learn not just the way we eat meat, but also the way we talk about meat and Davis’ book is a great place to start.

How do you think we can have positive conversations about meat eating? Have you ever sourced meat locally before? Have you read Davis’ memoir? As always, share the reading love.

One thought on “Eating Animals: a review of “Killing It” by Camas Davis”

This site uses Akismet to reduce spam. Learn how your comment data is processed.